An Equal Place: Lawyers in the Struggle for Los Angeles (August, 2021) 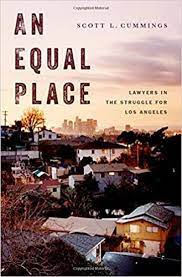 An Equal Place is a monumental study of the role of lawyers in the movement to challenge economic inequality in one of America's most unequal cities: Los Angeles. Breaking with the traditional focus on national civil rights history, the book turns to the stories of contemporary lawyers, on the front lines and behind the scenes, who use law to reshape the meaning of low-wage work in the local economy.

Covering a transformative period of L.A. history, from the 1992 riots to the 2008 recession, Scott Cummings presents an unflinching account of five pivotal campaigns in which lawyers ally with local movements to challenge the abuses of garment sweatshops, the criminalization of day labor, the gentrification of downtown retail, the incursion of Wal-Mart groceries, and the misclassification of port truck drivers.

Through these campaigns, lawyers and activists define the city as a space for redefining work in vital industries transformed by deindustrialization, outsourcing, and immigration. Organizing arises outside of traditional labor law, powered by community-labor and racial justice groups using levers of local government to ultimately change the nature of labor law itself.

Cummings shows that sophisticated legal strategy — engaging yet extending beyond courts, in which lawyers are equal partners in social movements — is an indispensable part of the effort to make L.A. a more equal place. Challenging accounts of lawyers' negative impact on movements, Cummings argues that the L.A. campaigns have achieved meaningful reform, while strengthening the position of workers in local politics, through legal innovation. Dissecting the reasons for failure alongside the conditions for success, this groundbreaking book illuminates the crucial role of lawyers in forging a new model of city-building for the twenty-first century. [from publisher web site]