Talking to the Girls: Intimate and Political Essays on the Triangle Fire (April, 2022) 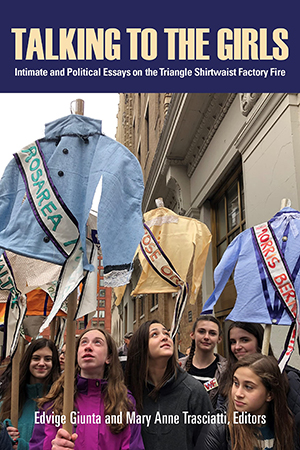 On March 25, 1911, a fire broke out on the eighth floor of the Asch Building in Greenwich Village, New York. The top three floors housed the Triangle Waist Company, a factory where approximately 500 workers, mostly young immigrant women and girls, labored to produce fashionable cotton blouses, known as “waists.”

The fire killed 146 workers in a mere 15 minutes but pierced the perpetual conscience of citizens everywhere. The Asch Building had been considered a modern fireproof structure, but inadequate fire safety regulations left the workers inside unprotected. The tragedy of the fire, and the resulting movements for change, were pivotal in shaping workers' rights and unions.

A powerful collection of diverse voices, Talking to the Girls: Intimate and Political Essays on the Triangle Fire brings together stories from writers, artists, activists, scholars, and family members of the Triangle workers. Nineteen contributors from across the globe speak of a singular event with remarkable impact. One hundred and eleven years after the tragic incident, Talking to the Girls articulates a story of contemporary global relevance and stands as an act of collective testimony: a written memorial to the Triangle victims. [from publisher web site]